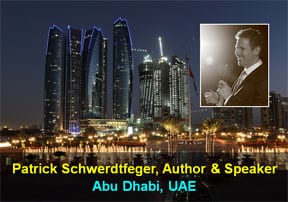 Patrick Schwerdtfeger is available to speak in Abu Dhabi as a leading authority on technology (including predictive analytics and business intelligence) and global business trends (including demographics, particularly in south Asia and the Middle East). He’s the author of the award-winning book Marketing Shortcuts for the Self-Employed (2011, Wiley) and a regular speaker for Bloomberg TV. If you are planning a business conference at the circular Aldar HQ building in Masdar City, the iconic Capital Gate leaning skyscraper in ADNEC Capital Center on Al Khaleej Al Arabi Street, the Abu Dhabi National Exhibitions Centre or the InterContinental Abu Dhabi, Patrick will deliver the excitement and buzz you’re looking for. As a motivational keynote speaker, his primary objective is to leave attendees inspired, energized and excited to improve their businesses.

Abu Dhabi has many conference facilities, including:

Abu Dhabi is the richest city in the world according to Fortune Magazine & CNN and also the world’s 67th most expensive city. With an estimated population of 896,800 in 2009, it is the second largest city of the United Arab Emirates and is located on the Arabian Peninsula across the Persian Gulf from Iran. Abu Dhabi is home to large companies such as International Petroleum Investment Company and also boasts the most extravagant F1 race track in the world, making it a stop on the annual F1 race tour series. It’s also the home of the Abu Dhabi National Exhibition Centre (ADNEC), the largest exhibition venue in the Middle East. Here is Patrick’s economic forecast for the United Arab Emirates.

Several large conferences are taking place in Abu Dhabi during 2013. Some of the largest ones include the World Future Energy Summit (WFES) 2013, which will bring all global leaders for a big discussion at the The Abu Dhabi National Exhibition Centre (ADNEC) in January. Also, the Government of the United Arab Emirates (UAE) has teamed up with (REN21) Renewable Energy Policy Network for the 21st Century to head the next International Renewable Energy Conference (IREC) in Abu Dhabi in January. In April, Abu Dhabi will also host the 13th World Travel & Tourism Council’s Global Summit with thousands of tourism leaders in the UAE Capital. Moreover, Abu Dhabi will host in November the2013 International Conference on Neurology & Epidemiology (ICNE).

If you’re visiting Abu Dhabi for a business convention, you may wish to try a few of the local hot spots. A Persian restaurant, Pars Palace (Phone: 02-681-8600) behind the Corniche Towers on Al-Khalidiya is recommended for its chicken and saffron, spicy kebabs, and home-baked bread. Marrakesh (Phone: 02-626-2700) in the Al Marzakiyah Millennium Hotel serves Moroccan cuisine and features Moroccan performances. Sayad (Phone: 02-690-9000) in the Al-Khudeirah Emirates Palace on Corniche Road West is a seafood restaurant famous for its intricate plates of tuna carpaccio with foie grass and lobster salad with sevruga caviar. Idiom (Phone: 02-681-0808) located opposite Tché Tché on Al-Khalidiya is a local café known for its delicious soups.

If you’re attending a convention in Abu Dhabi, the capital city of the United Arab Emirates (UAE), make sure you spare some time to visit the local attractions including Heritage Village, the Revered White Fort, the Liwa Oasis and the Corniche. Heritage Village is located near Marina Mall and it projects the lifestyle of the ancient Bedouin tribes. White Fort, popularly known by the name Al Hosn Palace, is located near Khalid Bin Street and is a 200-year-old palace with a significant administrative and political record in the city. Liwa Oasis is located on the northern edge of the Rub’al Khali desert and is regarded as the birth place of the rulers of this region. And finally, the Corniche is a beautiful coastline avenue of the city with parks and palm trees lining both sides.