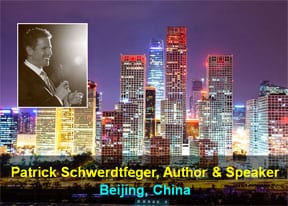 Patrick Schwerdtfeger is available to speak in Beijing as a leading authority on technology, self-employment and global business trends. He’s the author of the award-winning book Marketing Shortcuts for the Self-Employed (2011, Wiley) and a regular speaker for Bloomberg TV. If you are planning a business conference at the China National Convention Center on Tianchen West Road (across the street from the InterContinental Beijing Beichen), the Beijing International Hotel Convention Center on Jianguomen Inner Street in Dongcheng, the Global Trade Convention Center on North 3rd Ring Road Middle or some other convention space in Beijing, China, Patrick will deliver the excitement and buzz you’re looking for. As a motivational keynote speaker, his primary objective is to leave attendees inspired, energized and excited to improve their businesses.

Beijing has many conference facilities, including:

Beijing as one of the Four Great Ancient Capitals of China is a flourishing city in western China. The city is famous for its significant architectural buildings, historical spots, and rich cultural heritage. With a population over 19 million in 2010, Beijing ranks as the world’s 19th largest city by population.

Beijing serves as the headquarter of some of the largest state-owned companies in China that are included in the list of Fortune Global 500, including Sinopec, State Grid Corporation, China National Petroleum and China Telecom. With a geographic location and a natural setting perfect for business travelers, ample convention facilities exist in the city. In particular, the China International Exhibition Center (CIEC), and the Beijing International Convention Center (BICC) are two spectacular meeting facilities. Beijing hosted the Summer Olympic in 2008 and continues to host many other international events as well. Here is Patrick’s economic forecast for China.

Beijing is one of the most common cities hosting large national and international conferences. During 2013, it will host several conventions including the ISPO BEIJING which will take place in March at China National Convention Center. In addition, the RECOMB 2013 which is the 17th Annual International Conference on Research in Computational Molecular Biology is scheduled in April at the National Tsinghua University. More so, the International Society of Sports Psychology is hosting the 2013 ISSP World Congress in at the Beijing Sports University, whereas the 10th International Congress of Plant Pathology by the Chinese Society for Plant Pathology will take place at the Beijing International Convention Center in August.

After concluding your business conference in Beijing, travel around and visit places like the Forbidden City, the Temple of Heaven, Tiananmen Square and the Ming Tombs. The Forbidden City, located in No. 4 Jingshan Front Street, Dongcheng District, consists of 9000 rooms and portrays the architecture of 18th century Qing Dynasty rulers. The Temple of Heaven east of Tianqiao, Chonwen District, is found in the southern part of Beijing and is regarded as the most holy place in the country. Tiananmen Square in the heart of the city is a largest public square. Finally the Ming tombs including the Dingling and Changling tombs are seen near the Great Wall, which is another wonderful site to visit.