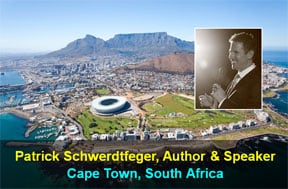 Patrick Schwerdtfeger is available to speak in Cape Town as a leading authority on demographics (including the exploding population across Africa), online marketing (including social media) and global business trends. He’s the author of the award-winning book Marketing Shortcuts for the Self-Employed (2011, Wiley) and a regular speaker for Bloomberg TV. If you are planning a business conference at the Cape Town International Convention Centre (CTICC) on Lower Long Street (Western Cape), the Tulip Hotel & Convention Centre on Strand Street, the Townhouse Hotel & Conference Centre on Corporation Street or some other convention space in Cape Town, South Africa, Patrick will deliver the excitement and buzz you’re looking for. As a motivational keynote speaker, his primary objective is to leave attendees inspired, energized and excited to improve their businesses.

Cape Town has many conference facilities, including:

Considered as South Africa’s second most populous city with over 3.5 million residents as of 2007, Cape Town has become a favorite destination for immigrants and expatriates. Cape Town is bordering a rocky peninsula called the Cape Peninsula and is well-located in the province of Western Cape, south west of South Africa. It’s a major business hub and tourism district in South Africa, which makes it a perfect location for sports and business events. Events hosted by the city include 9 World Cup matches and some other business events such as Africa Oil Week, Marketing Indaba and Africa Com. The Cape Town International Convention Centre and the CAB Conference Centre are two of the conferencing facilities available for business visitors. Today, Cape Town remains a major tourist attraction in Africa notably due to its good climate, magnificent tourist attractions and its rich cultural heritage. Here is Patrick’s economic forecast for South Africa.

A number of national and international conferences and summits are going to take place in Cape Town, South Africa. Some of these include the University of the Western Cape’s International Symposium for Toxicity Assessment Conference which will take place in February at the university’s campus. Aside from that, Exporta Group is also hosting the Africa Trade Finance Week Conference in March at the Westin Cape Town. Moreover, Cape Peninsula University of Technology is hosting their 1st International Conference, Leadership and Management in Projectified Industry South Africa “Leading and managing the complexities in an era of unrestrained industry projectification and personnel globalization” in April at the university’s campus. Furthermore, the Academy of World Finance, Banking, Management and Information Technology is hosting their Annual Conference in July at the Cape Peninsula University of Technology.

When in Cape Town for a business convention, you may want to try some of the local flavors at Nyoni’s Kraal, Africa Café, Aubergine, and Pigalle. Diners at Nyoni’s Kraal (Phone: 021-422-0529) on Long Street in City Bowl is famous for exotic dishes like grilled sheep’s head, mopane worms, and chicken’s feet. Africa Café (Phone: 021-422-0221) on Shortmarket Street also in City Bowl features a set combo meal with 15 African sample dishes for the hungry tourist. Aubergine (Phone: 021-465-4909) on Barnet Street in Gardens is commandeered by Cape Town’s Harald Bresselschmidt who produces creative hors d’oeuvres and perfect soufflés. Pigalle (Phone: 021-421-4343) on Somerset Road in Waterkant serves high-end seafood dishes like shrimp cocktail and a seafood platter.

Once you finish your business conference, try spending some quality time in Cape Town by visiting places like Table Mountain, Robben Island, Kirsten Bosch Botanical Gardens and Cape Wine Lands. Table Mountain is seen in the Table Mountain National park, which is 1,086 meters above Table Bay and is considered to be one of the new Seven Wonders of the World. Robben Island, situated 12 KM off shore, is one of the world’s famous heritage sites and holds the security prisons. The Kirsten Bosch Botanical Gardens are found in a wide spread area of 528 hectares on the eastern slopes of Table Mountain, which should be a priority on any tourist to-do list. Cape Wine Lands are grape yards with a perfect scenic appearance that stretch from coast to plains of little Karoo.