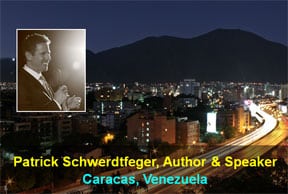 Patrick Schwerdtfeger is available to speak in Venezuela as a leading authority on technology, online marketing and global business trends. He’s the author of the award-winning book Marketing Shortcuts for the Self-Employed (2011, Wiley) and a regular speaker for Bloomberg TV. If you are planning a business conference at the Gran Melia Caracas on Avenida Casanova, the Hotel Alba on Avenida Mexico, the Venezuela Marriott Hotel Playa Grande or some other convention space in Caracas, Venezuela, Patrick will deliver the buzz and energy you’re looking for. As a motivational speaker, his #1 objective is to leave attendees excited, inspired and energized to take action and see tangible results.

Caracas has many conference facilities, including:

Caracas is Venezuela’s capital and its pride and joy, an attractive city for a conference or convention. It’s bordered by the western point of enormous El Avila National Park, which separates Caracas from the beaches and water of the Caribbean Sea. This geographical location puts the city square in the tropical savanna zone, which means it has mostly mild temperatures, many electrical storms and, once in a while, some cyclones. Some six million people live in the urbanized regions of the Distrito Capital, with many more residents in the satellite cities that surround it.

The city of Caracas will bring us several conventions and symposiums during 2013. Some of these include the VANAS Conference hosted by the Association of American Schools in South America which will take place in January at Colegio Internacional de Caracas. In addition, the ICF International Coach Federation, along with the Venezuelan Community for Professional Coaching (COVECOP) and the United Nations Association of Venezuela (ANUV) is hosting the 2013 Latin American Conference on ICF Coaching in March at the Convention Hall of Warairarepano. Moreover, the American College of Physicians Internal Medicine is holding the 2013 ACP Venezuela Chapter Meeting in May at Hotel Eurobuilding.

Wrap up your conference meeting in one of the many restaurants in Caracas that deliver world-class dishes of practically every type and price range. One of the best Caracas restaurants is Resturante Le Gourmet, which, by all accounts, certainly lives up to its name. You’ll find an outstanding Mediterranean and European menu here, all chef-prepared and served to perfection in a relaxed, welcoming atmosphere. Another extremely popular restaurant in the city is simply called Alto. Make reservations for this place, which only serves dinner and stays open late. The haute cuisine menu is excellent, and you’ll want to go back again for a special occasion. Craving steak? You can’t go wrong with Maute Grill, located in Rio de Janeiro, Caracas.

During your conference vacation time in Caracas, it’s a must to set aside a day to visit Hacienda Floresta, a park from the 17th century, which was once a formidable coffee plantation. This is a popular tourist destination for both young and old, offering a museum, gardens, and fun, free activities such as classes and concerts. Another favorite visiting spot is the Museo de Arte Contemporaneo, not to be missed. You’ll see work by Miro, Matisse and Picasso, among many others. Caracas also has a great children’s museum, Museo de los Ninos, in case you brought some tykes with you.