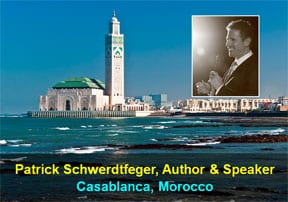 Patrick Schwerdtfeger is available to speak in Casablanca as a leading authority on online marketing and global business trends. He’s the author of the award-winning book Marketing Shortcuts for the Self-Employed (2011, Wiley) and a regular speaker for Bloomberg TV. If you are planning a business conference at the Barcelo Casablanca on Boulevard d’Anfa, the Hotel Novotel Casablanca City Center, the Oum Palace Hotel on Rue Kamal Mohamed or some other convention space in Casablanca, Morocco, Patrick will deliver the buzz and energy you’re looking for. As a motivational speaker, his #1 objective is to leave attendees excited, inspired and energized to take action and see tangible results.

Casablanca has many conference facilities, including:

Casablanca, made world-famous by the Humphrey Bogart-Ingrid Bergman movie of the same name, is Morroco’s chief port and a common site for symposiums and conferences. It sports one of the world’s biggest artificial ports, the Port of Casablanca, an important world seaport and the largest in North Africa. The Royal Moroccan Navy also runs its main naval base here. Casablanca has a long and fascinating history spanning the 600-BC Roman period, through its rule by the Portuguese, the Spanish and eventually, the French in the early 1900s. Nearly half its present population is of European heritage. Today, Morroco is an independent nation.

Several conferences and conventions are going to take place in Casablanca. These include the National Conference of the Power Industry North Africa which will be held in February at Hyatt Regency Casablanca. Also, the 20th International Conference on Telecommunication “Information and Communication Technologies (ICT) Greening the World” will take place in May at Hotel Palace d’Anfa. On the other hand, the National Council for the Social Studies will host the International Social Studies Conference “Education for Democracy and the Arab World” in June at the University of St. Louis and the Moroccan Center for Civic Education.

Don’t miss the wonderful, authentic Spanish food while attending your conference in Casablanca. La Cocina tops the list for Paella you must try, and the price and service are agreeable, too. If you’ve got a yen for seafood, try Le Port de Peche, in the port sector near the train station. This is reportedly the best place for Calamari in Morocco, and they also make a succulent steak. If you loved the movie, you should hit Rick’s Café while you’re in Casablaca. Not only can you get a great Lamb Couscous there, you can take a trip down memorabilia lane.

Set aside some time around your conference meetings in Casablanca to see the historic city. It offers some world-class tourist attractions and fabulous architectural examples. The Hassan II Mosque is one of the most-visited and a highlight of any trip to Casablanca. If you arrive at dusk (or dawn), you’ll get some wonderful photographs. The Museum of Moroccan Judaism is a must-see for history buffs. There are only two museum dedicated to Judaism in the Islamic world, and this is one of them. Take advantage of the great beaches, promenades and beach clubs Casablanca has to offer, too. Try the Corniche Boulevard area for the most fun.