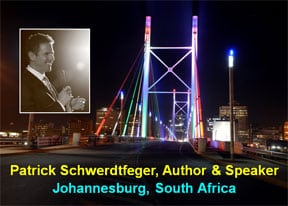 Patrick Schwerdtfeger is available to speak in Johannesburg as a leading authority on technology, self-employment and global business trends. He’s the author of the award-winning book Marketing Shortcuts for the Self-Employed (2011, Wiley) and a regular speaker for Bloomberg TV. If you are planning a business conference at the Sandton Convention Centre on Maude Street in Sandton, the Eagles Nest Conference Centre on Leslie Road in Fourways, the Fabz Estate Hotel on Concourse Crescent in Lonehill or some other convention space in Johannesburg, South Africa, Patrick will deliver the excitement and buzz you’re looking for. As a motivational keynote speaker, his primary objective is to leave attendees inspired, energized and excited to improve their businesses.

Johannesburg has many conference facilities, including:

Johannesburg, considered as one of the world’s largest cities, is Gauteng’s provincial capital with about 635 square miles of total land area. Johannesburg’s metropolitan area has a population of over 10 million as of 2007, making it the largest city in South Africa. Conventions and events venue in Johannesburg include the Expo Center Nasrec, the Sandton Convention Centre and a variety of other first-rate hotels offering meeting and conference facilities. Confluence Digital Research, NokusaEI and NetSync are some of the major companies in Johannesburg that contributed to the city’s development and helped it rank 47th as a center of global commerce. The thriving city is situated on the Highveld, or the eastern plateau area in the province of Gauteng, South Africa. Here is Patrick’s economic forecast for South Africa.

A number of conferences and summits will be held in Johannesburg, South Africa. These includes the Academy of Management Africa’s National Conference in January at the Gordon Institute of Business Science at the University of Pretoria. In addition, the South African National Energy Association (SANEA), in collaboration with the World Energy Council and the African Union and the NEPAD Planning & Coordinating Agency, is hosting the Africa Energy Indaba in February at the Sandton Convention Centre. More so, the Africa Health Exhibition and Congress by Africa Health will be held at the Gallagher Convention Centre in May, whereas the 3rd QS-MAPLE (Middle East and Africa Professional Leaders in Education) Conference “Meeting the global challenges in higher education” by the Association of African Universities will be held in May at the Hyatt Regency Hotel.

While attending a business conference in Johannesburg, South Africa, a few local restaurants are worth checking out. Soulsa (Phone: 011-482-5572) on 7th Street features African dishes and aptly creative interiors including lime-washed floorboards, red tree mural, and double-height ceilings. Pleasing guests with its chic African decor, Moyo’s (Phone: 011-684-1477) on High Street in Melrose Arch serves anything regional, from Algeria chicken to Tanzanian fish curry. Loft (Phone: 011-482-8986) on 7th Street has the feel of a Manhattan bistro with classy chandeliers, bright-colored sofas, and treats like ostrich carpaccio and springbok in bacon. Lekgotla (Phone: 011-884-9555) in Nelson Mandela Square in Sandton is another chic African eatery with domed ceilings, white lanterns, and cushioned sofas.

After having attended a business conference in Johannesburg, South Africa, take some time to travel round the wonderful city by visiting the Museum Africa, Gold Reef City, Market Theatre and the Herman Eckstein Park. The Museum Africa, located in Gauteng 2113, epitomizes the various tribes and peoples of South Africa. The Gold Reef City has the world’s richest gold mine located in Gauteng 2159. The Market Theatre reflects the culture of the city and has four theatres on a single level. The Zoo Lake in Herman Eckstein Park is a well recognized public park situated opposite to Johannesburg Zoo.