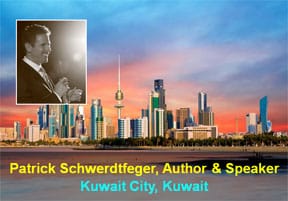 Patrick Schwerdtfeger is available to speak in Kuwait as a leading authority on online marketing and global business trends including business intelligence and demographics, particularly in south Asia and the Middle East. He’s the author of the award-winning book Marketing Shortcuts for the Self-Employed (2011, Wiley) and a regular speaker for Bloomberg TV. If you are planning a business conference at the Kuwait Convention Center & Royal Suites in the Shuwaikh Free Trade Zone, the Holiday Inn Kuwait on Abdulla Al Ahmed Street, the Courtyard Kuwait City on Hilalli Street Road or some other convention space in Kuwait City, Kuwait, Patrick will deliver the buzz and energy you’re looking for. As a motivational speaker, his #1 objective is to leave attendees excited, inspired and energized to take action and see tangible results.

Kuwait City has many conference facilities, including:

Kuwait City is a beautiful convention city on the fringe of the Persian Gulf. It blends war-torn sectors with contemporary and Islamic architecture, along with bustling street markets with elegant hotels. The result is a fabulous mix of history and modern advances in Kuwait’s capital city. Perched on the tip of an inlet called Kuwait Bay, the dry terrain of Kuwait City is softened by the waters of the Arabian Sea. Known for its futuristic-looking Kuwait Towers, Kuwait City is the heartbeat of the Kuwaiti emirate, its culture and its economics.

2013 will bring hundreds of conventions and conferences to Kuwait City. Some of these larger meetings include the Independence Exhibition 2013 which will be held in February at the Kuwati International Fairs Ground. Also, the Kuwait Produced Water Management Conference is taking place in March at Crowne Plaza Kuwait. In addition, the Kuwait Fabtech Conference & Exhibition will take place in April next year at the Kuwait Hilton Hotel. On the other hand, the Gulf Defense & Aerospace hosted by Kuwait Int’l Fair & TNT Productions, Inc. will be held in December at Kuwait International Fairs Ground.

Kuwait City has some excellent restaurants you might want to try when you don’t have to be at your convention or conference. The favorite among traditional mid-eastern cuisine is Mais Alghanim, located just across from the Kuwait Towers. The hummus is delectable, the menu is varied and the staff is hospitable here. If you’ve got a yen for Japanese cuisine, visit Tatami, a new restaurant in the heart of the city. You’ll love the sleek décor and the artistic presentations as much as the food. Al-Mayas serves some of the best Lebanese fare in the entire city, so try to hit it while you’re in town. Order the Kabar with cherry sauce or Fatosh Salad for some real treats.

Kuwait City has much to see and experience in between business meetings at your conference. To really get the flavor of this unique city, try an afternoon at Souk Al-Mubarakiya, a quintessential middle-eastern street market. The Scientific Center is a favorite sight to see in Kuwait City, containing an aquarium and an awesome 3-D iMax cinema. Another good bet would be the Tareq Rajab Museum of Islamic Arts. This place offers a cornucopia of jewelry, costumes and weapons collections. If you like museums, you could also try the Kuwait National Museum, which has a planetarium as well.