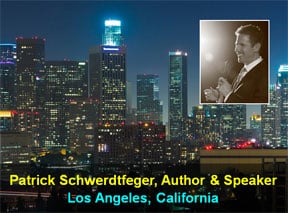 Patrick Schwerdtfeger is a motivational keynote speaker who spoke at an event for small business owners sponsored by BlackBerry in Los Angeles in April 2011. He spoke about business trends and social media, and has also contributed to dozens of other events in the area. He’s the author of the award-winning book Marketing Shortcuts for the Self-Employed (2011, Wiley) and a regular speaker for Bloomberg TV. Patrick specializes in emerging business trends, modern entrepreneurship and innovative small business marketing. So if you’re planning a business convention in the Los Angeles Convention Center on South Figueroa Street, the Rodeway Inn Convention Center on West Olympic Boulevard, the Staples Center downtown right off the 110 Harbor Freeway or some other conference facility in Los Angeles, California, Patrick will deliver the buzz and excitement you’re looking for.

Los Angeles has many conference facilities, including:

Los Angeles is the nation’s second largest metropolis behind New York. The greater LA area has a population of almost 13 million people. Although the city is best known for it’s entertainment industry, it actually has an incredibly diverse economy and represents the third largest economic center on the planet (after Tokyo and New York). Known as the “City of Angels”, LA is a global city located in Southern California. As a business, education and entertainment hub, the city provides conference facilities for its business visitors including the Los Angeles Convention Center downtown, the Westin Bonaventure and the Staples Center. Every year, Los Angeles plays host to the Entrepreneur Association Conference and Echelon Pride in Business Expo among many other international events. Countless Fortune 500 companies including Ernst & Young, Bank of America and Manulife Financial all have major regional offices in L.A. Here is Patrick’s economic forecast for America.

Dozens of business conferences will be taking place in Los Angeles in 2014. Susan Rose Productivity Coaching will be hosting a 2014 Business Planning Workshop in January at the Skirball Cultural Center on North Sepulveda Boulevard. The IACC Americas Conference 2014 is being hosted by the International Association of Conference Centers at The Pacific Palms Resort on One Industry Hills Parkway in March. In April the Center for International Business Education & Research (CIBER) will be organizing the Asia/Pacific Business Outlook Conference at the USC Davidson Conference Center on South Figueroa Street. The Van de Kamp Innovation Center on Fletcher Drive will play host to the 2014 SoCalBio Workforce Summit being organized by the Southern California Biomedical Council in August.

Los Angeles will host some of the largest conferences and summits during 2013. One of these meetings taking place in February is the 6th Annual International Conference on Positive Aging hosted by Fielding Graduate University at The Center for Healthy Communities at The California Endowment in LA. Another conference is the Good Teaching Conference South by the California Teachers Association taking place in March at Los Angeles Airport Marriott. Also, there will be an Annual Meeting by the Association of American Geographers in April at Westin Bonaventure, LA Downtown Hotel, and Millennium Baltimore Hotel. Moreover, the ‘Work, Stress, and Health: Protecting and Promoting Total Worker Health’ by the American Psychological Association will be held at Westin Bonaventure Hotel and Suites in May.

While attending a business conference in LA, a few local restaurants are definitely worth checking out. Roscoe’s House of Chicken & Waffles (Phone: 323-466-7453) on North Gower Street is LA’s choice for Southern comfort food like fried chicken and waffles. El Cholo (Phone: 310-899-1106) on Wilshire Boulevard is known for its festive atmosphere perfect for an afternoon of margaritas and blue-corn chicken enchiladas. Café at the End of the Universe on East Observatory Road in the Griffith Observatory is designed with space age interiors and serves gourmet snacks like turkey and cranberry sandwich. Swingers (Phone: 323-653-5858) on Beverly Boulevard is an all-American retro diner suited for a quick bite of burgers and fries.

Relax yourself after attending a business conference in Los Angeles by viewing some of the top attractions like the J Paul Getty Museum, Tandem Paragliding, Los Angeles Helicopter Tour and the headquarters of Hollywood. The J Paul Getty Museum is situated in the Getty Center up in the hills. You have to take a tram to get up to the campus and the museum includes many buildings and gardens, and boasts an amazing collection of paintings and sculptures. If adventure thrills you, go for a Tandem Paragliding experience in Malibu. You could also reserve the Grand Helicopter Tour for an unforgettable trip of the whole city. And finally, if you’re a big movie buff, a visit to Universal Studios or the headquarters of Hollywood near the Knott’s Betty farm are both worth scheduling.