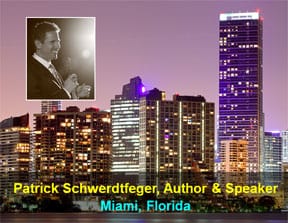 Patrick Schwerdtfeger is a motivational keynote speaker who first spoke at an entrepreneurial event co-sponsored by Comcast Cable and Bloomberg TV at the Panthers Stadium in Miami in December 2010. He spoke about social media and how it can be used as a marketing tool for small businesses and has returned to Miami several times since then. He’s the author of the award-winning book Marketing Shortcuts for the Self-Employed (2011, Wiley) and a regular speaker for Bloomberg TV. Patrick specializes in business trends including demographic shifts, ‘big data’ and social media and online markeitng. So if you’re planning a business convention in the Miami Beach Convention Center, the Doubletree Miami Airport Convention Center, the Fontainebleau Miami Beach Hotel or some other conference facility in Miami, Florida, Patrick will deliver the buzz and excitement you’re looking for.

Miami has many conference facilities, including:

Miami is a major cultural hub on the southeast tip of Florida. It exists on a piece of land approximately 85 miles from north to south, and 15 miles from east to west. The metro population is about 5.5 million people and the city acts as a gateway from the USA to South America. Miami ranks as the 8th as the most populous country in the United States, and the most populous in Florida. It is situated on the shoreline of the Atlantic Ocean. Miami is host to international events such as Mercedes-Benz Fashion Week Miami and the largest art exhibition in the world known as the “Olympics of Art”. Being a favorite venue for major events, the city houses convention venues which offer outstanding meeting facilities. These include the Miami Beach Convention Center and the Soho Studios. Miami is a leading financial and entertainment center that attracts international companies to set offices in the city. Companies in Miami include At&T, FedEx, Sony, Disney, Exxon, Kraft Foods and Cisco among others. Here is Patrick’s economic forecast for America.

Miami is hosting hundreds of conferences during 2014. In January, the Mobile Payments Conference will be held at the Miami Beach Convention Center on Convention Center Drive and is being organized by MP Associates Inc. Von Enterprises International, Inc is hosting the 2014 Product Placement Expo at the Miami Airport Convention Center near Dolphin Expressway in January. The Procurement and Strategic Sourcing Forum will be organized by the Consero Group LLC and held in February at the Trump National Doral Miami. The 17th International Management World Congress will be held at the Hilton Miami Downtown on Biscayne Boulevard in April. This is being organized by the LabExReFi.

The sunny city of Miami is also holding numerous meetings and summits in the upcoming year. One of which is the 6th International Conference in January to be hosted by the FIU Department of Biological Sciences and the Fairchild Tropical Botanic Garden at Koyen’s Conference Center located at the Biscayne Bay Campus of Florida International University. Additionally, the Miami Winter Symposium on the Molecular Basis of Metabolism and Nutrition organized by University of Miami, International Union of Biochemistry and Molecular Biology, Nature Publishing Group and Scripps Florida will take place at JW Marriott Marquis Miami in February. Moreover, the Winter Music Conference by Miami Visitor and Convention Authority will be held at the Miami Beach Convention Center in March.

When in Miami for a business convention, you may want to try some of the local flavors at Andiamo!, CJ’S Crab Shack, Xixon, and Prime 112. Reminiscent of a 1950s drive-through diner, Andiamo! (Phone: 305-762-5751) on Biscayne Boulevard is known for its wide range of pizza toppings from the rare goat cheese and white tuna to the classics like salami and olives. Cavalier Hotel’s CJ’s Crab Shack (Phone: 305-534-3996) on Ocean Drive is famous for its low-priced combos during happy hour: $5 for a half-dozen oysters or $6 for two stone-crab claws. A favorite tapas spot, Xixon (Phone: 305-854-9350) on Southwest 22nd Street serves codfish fritters and bocadillo with Serrano ham and Manchego cheese. Hollywood celebrities are known to enjoy grilled beef at Prime 112 (Phone: 305-532-8112) on Ocean Drive, a local steakhouse situated in Miami’s oldest inn.

Refresh yourself after a long business conference by viewing some of the exciting tourist attractions of Miami in Florida. Some of them include South Beach, Miami Seaquarium, Everglades National Park and Parrot Jungle Island. South Beach is one of the most happening and thrilling spots in the area. You can go shopping all day and party all night! The popular Miami Seaquarium is situated on the boardwalk between downtown Miami and Key Biscayne and is known for its outdoor aquarium. Everglades National Park is one of the most bizarre public parks in the United States with 1.5 million acres of saw-grass prairies, swamps, and sub-tropical jungles situated on the southern tip of Florida. Parrot Jungle Island is a fun filled tourist spot where you can take a close look at exotic tropical birds.