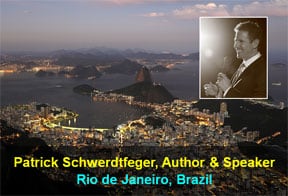 Patrick Schwerdtfeger is available to speak in Rio de Janeiro and is a leading authority on technology, self-employment and global business trends. He’s the author of the award-winning book Marketing Shortcuts for the Self-Employed (2011, Wiley) and a regular speaker for Bloomberg TV. If you are planning a business conference at the Rio Convention Center on Avenida Salvador Allende, the Sulamerica Convention Center on Avenida Paulo de Frontin, Centro Empresarial Rio Cidade Nova in Estácio or some other convention space in Rio de Janeiro, Brazil, Patrick will deliver the excitement and buzz you’re looking for. As a motivational keynote speaker, his primary objective is to leave attendees inspired, energized and excited to improve their businesses.

Rio de Janeiro has many conference facilities, including:

Dubbed as Cidade Maravilhosa which means “Marvelous City”, Rio de Janeiro is the capital of the state of Rio de Janeiro. It is a metropolitan area on the southeast region of Brazil boasting a population of over 6 million as of 2011 which ranked as the sixth largest city in the Americas in terms of population. Having the second largest GDP in Brazil, Rio De Janeiro attracts large companies such as Shell, Brazilian Development Bank (BNDES), Embratel (a telecom company) and Business Rio (one of Brazil’s major newspapers). Being a tourist and business hub, Rio de Janeiro hosts different high-profile events which include ABAV Fair of Americas and Prevenrio. The Summer Olympics are also set to take place in the city in 2016. Rio De Janeiro offers business visitors different conference facilities such as JW Marriott Hotel, Arena Copacabana and Porto Bay Rio Internacional Hotel. Here is Patrick’s economic forecast for Brazil.

Various conventions and summits are going to take place in Rio de Janeiro during 2013 including the LESI 2013 Annual Conference by the Licensing Executives Society International, which will be held at The Atlântica Windsor in April. In addition, the www2013: 22nd International World Wide Web Conference by the International World Wide Web Conferences Steering Committee will be held in May at the Windsor Barra Hotel. On the other hand, the 13th World Conference on Transportation Research Society will be organized in July at the Federal University of Rio de Janeiro, whereas Pangborn 2013: 10th Pangborn Sensory Science Symposium by Elsevier will be held in August the Windsor Barra Hotel.

If you’re visiting the city of fun and excitement, Rio de Janeiro, for a business conference then you must visit the Sugar Loaf Mountain, the Cristo Redentor, the Pedra Da Gavea, and the Centro Cultural Banco do Brazil. Board the exciting cable car rides over the 390 foot Sugar Loaf Mountain made of granite and get a superb view of the city of Rio de Janeiro. Engulf yourself in the heavenly presence of the Cristo Redentor near the Sugar Loaf Mountain and see the panoramic view of the city. Enjoy hiking a few miles from the city center of at the Pedra Da Gavea. Relax in the fun-filled exhibitions, theatrical performances and cinemas at the Centro Cultural Banco do Brazil.