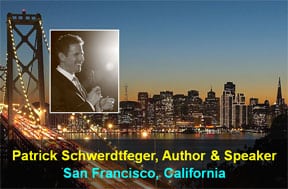 Patrick Schwerdtfeger is a motivational keynote speaker who lives in Walnut Creek and has spoken in the San Francisco Bay Area dozens of times, including events for Grant Thornton, Penn-American Insurance and Research in Motion (BlackBerry phones) among many others. His speeches generally related to technology, online branding and the social media revolution. As an author and professional speaker, Patrick specializes in business trends including ‘big data’, innovative online marketing strategies and modern entrepreneurship. He’s the author of the award-winning book Marketing Shortcuts for the Self-Employed (2011, Wiley) and a regular speaker for Bloomberg TV. So if you’re planning a business convention in the Mission Bay Conference Center, the InterContinental San Francisco, the Moscone Center south of Market Street or some other conference facility in San Francisco, California, Patrick will deliver the buzz and excitement you’re looking for.

San Francisco has many conference facilities, including:

The San Francisco Bay Area is home to over 7 million people, making it the 4th largest metropolitan area in the country. The city is among the most visited cities in the world and is best known for its steep city streets, dense population, chilly summer fog and the Golden Gate Bridge. Ranking 35th out of 100 most visited cities in the world, San Francisco is a tourist destination attracting millions of visitors annually.

San Francisco is regarded as a global technology and center, and hosts many large corporations including the Global English Corporation, SalesForce, Orrick, and Nitro PDF Software. San Francisco is also one of the top-ten convention and conference destinations in North America. The city is home to the Moscone Center, the largest convention and exhibition complex in San Francisco. Here is Patrick’s economic forecast for America.

2013 is going to bring hundreds of large conferences to San Francisco. Some of these meetings include the 2013 Emerging Media Conference by EmMeCon at Hotel Kabuki in January. Other larger annual conferences taking place in the city is the San Francisco Writers Conference, a 10th anniversary celebration in February at the Intercontinental Mark Hopkins Hotel, Mason & California, San Francisco. Also, PWBC’s Professional BusinessWomen of California Conference will be held in May 23 at the Moscone Center, whereas the 95th Annual Meeting & Expo by the Endocrine will also be at Moscone Center in June.

Enjoy some of the local specialties while attending your business conference in San Francisco and check out local hot spots like Boulevard, Escape from New York Pizza, Chef Jia’s, and La Mar Cebicheriá. Boulevard is one of San Francisco’s most respected restaurants and is located on Mission Street (Phone: 415-543-6084). It entices guests with a chic menu of pork chops, soft-shell crabs, bourbon ice cream, and chocolate ganache cake. Escape from New York Pizza (Phone: 415-668-5577) on Haight Street has a range of pizza toppings, from sundried tomato to goat cheese. Chef Jia’s (Phone: 415-389-1626) on Kearny Street in Chinatown mixes and matches their entrees of chicken and pork with three signature sauces: spicy black bean sauce, tangy brown vinegar sauce, and savory-salty oyster sauce. And finally, enjoy an afternoon by the bay at La Mar Cebicheriá (Phone: 415-397-8880) at Pier 1 1/2 on the Embarcadero, and indulge in a plate of Peruvian cebiche made of the infamous leche de tigre.

After attending your business conference in San Francisco, take some time to visit the many local tourist attractions like the Marin Headlands, the Golden Gate Bridge, Alcatraz and the San Francisco Bay. Plan your day in advance and start with an invigorating hike through the Marin Headlands located at the Point Bonita lighthouse that can be accessed by a suspension bridge. Get your picture taken on the Golden Gate Bridge in San Francisco which is one of the best known bridges in the world. Learn the history of one of the most visited non-functional prisons of all time on Alcatraz Island. And end the day with an amazing walk along the Embarcadero and enjoy beautiful views of the world-famous San Francisco Bay.