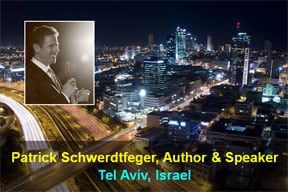 Patrick Schwerdtfeger is available to speak in Tel Aviv as a leading authority on technology, online marketing and global business trends. He’s the author of the award-winning book Marketing Shortcuts for the Self-Employed (2011, Wiley) and a regular speaker for Bloomberg TV. If you are planning a business conference at the Hotel Mercure Tel-Aviv City Center on Ben Yehuda, the Leonardo Boutique Tel Aviv on HaBarzel, the Crowne Plaza Tel Aviv City Center in Azrieli Center or some other convention space in Tel Aviv, Israel, Patrick will deliver the buzz and energy you’re looking for. As a motivational speaker, his #1 objective is to leave attendees excited, inspired and energized to take action and see tangible results.

Tel Aviv has many conference facilities, including:

Corporate meeting planners would do well to study up a bit on the fascinating city of Tel Aviv. Flanked by the shores of the Mediterranean Sea on its west coast, Tel Aviv is Israel’s second-largest city. With its population of just over 400,000 citizens, Tel Aviv attracts some 2-1/2 million visitors every year. A center of high-finance, culture and leisure, Tel Aviv is yet hardly over a century old, born in 1909. Perhaps due to its youth, it attracts young professionals, artists and entrepreneurs to its sleek metropolitan neighborhoods.

Tel Aviv will present numerous conventions during 2013 including the International Federation for Structural Concrete’s “Engineering a Concrete Future: Technology, Modeling & Construction” in April next year at Dan Panorama Hotel and Convention Center. Also, IATI Biotechnology & Medical Devices’ 12th National Life Science & Technology Week will take place in June at the David InterContinental Hotel. On the other hand, the 17th European Carbohydrate Symposium (Eurocarb 17) will be held in July at the David Intercontinental Hotel and Convention Center, while the 2013 Water Technology and Environment Control Exhibition & Conference by the Israel Institute of Technology and The Israel Chemical Society will be held in October at the Israel Trade Fairs and Convention Center.

The eclectic, sophisticated cuisine offered up in Tel Aviv restaurants is worth scheduling your convention around. Whatever you do, don’t miss Abu Hasan/Ali Karavan if you’re on the hunt for savory local fare. They serve delicious Middle Eastern cuisine for breakfast, brunch, and lunch time. Try the hummus for sure! For a casual ambience and a wonderful, varied menu, make reservations for Bertie on King George Street. They serve fabulous drinks and wine as well. Shila is an upscale restaurant, always on the top ten list. You can get succulent seafood and Mediterranean dishes here, such as the Carpaccio of Mackerel with figs.

Tel Aviv has some dazzling landmarks to see before or after your business convention. One of them, the Nalagaat Center, is also a unique restaurant. You’ll see a show presented by deaf and blind actors, then enjoy a meal with no lights at all around you, served by blind waiters. It’s an astonishing, one-of-a-kind experience. Another must-see is the Palmach Museum. It’s interactive, so make a reservation. While in Tel Aviv, be sure to spend an afternoon in the Neve Shalom and Neve Tzedek, two remarkable Jewish neighborhoods that are home to many treasures. Then head over to the port area of Old Tel Aviv for some sea air and relaxation.