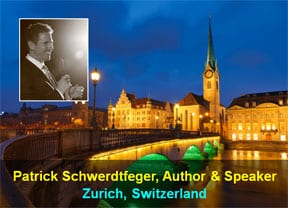 Patrick Schwerdtfeger is available to speak in Zurich as a leading authority on technology, online marketing and global business trends. Although he was born in Canada, his mother grew up in Uznach and he holds Swiss citizenship. Patrick is the author of the award-winning book Marketing Shortcuts for the Self-Employed (2011, Wiley) and a regular speaker for Bloomberg TV. If you are planning a business conference at the Swissotel Zurich on Schulstrasse, the Sonnenberg Convention Center on Aurorastrasse, Kongresshaus on Gotthardstrasse or some other convention space in Zurich, Switzerland, Patrick will deliver the excitement and buzz you’re looking for. As a motivational keynote speaker, his primary objective is to leave attendees inspired, energized and excited to improve their businesses.

Zurich has many conference facilities, including:

One of the world’s largest financial hubs and rated second in the Quality of Living Survey by Mercer in 2011, Zurich is the capital city of the canton of Zurich. It is an alpha city nestled in the center of Switzerland and is known as the wealthiest city in Europe. Some of the large companies that are headquartered in Zurich include Swiss Re, Credit Suisse and UBS. Zurich’s metropolitan area has a population of about 2 million people, making it the largest city in Switzerland. Events and convention venues in Zurich include the Messezentrum Zurich and Kongresshaus Zürich AG. Zurich hosted the UEFA Euro in 2008.

When visiting Zurich for a business convention, you may wish to try a few of the local hot spots. Europe’s first vegetarian restaurant, Haus Hiltl (Phone: +41-044-227-7000) at Sihlstrasse 28 offers a wide range of healthy dishes, fresh fruit juices and other homemade drinks. Another institution in Switzerland’s culinary heritage, Zeughauskeller (Phone: +41-044-211-2690) at Bahnhofstrasse 28a opened its doors in 1487 to offer traditional Zurich cuisines like “Bürgermeister Schwert” or veal paillards wrapped around a sword blade. Blindekuh (Phone: +41-044-421-5050) at Mühlebachstrasse 148 features eating in complete darkness which is supposed to heighten your sense of taste. Another popular restaurant to tourists, Adler’s Swiss Chuchi (Phone: +41-044-266-9696) at Rosengasse 10 samples local specialties such as the “Adler House Fondue” or crispy rosti.

After attending a conference in Zurich, plan some extra time to enjoy the Old Town, the Museum of Art, National Museum, the Üetliberg, and the St. Peter’s Church. Zurich’s Old Town has some of the world’s best preserved architectural structures, making it a significant religious landmark. Engage in the beauty of modern art as well as pieces from the 1600s at the Museum of Art at the Heimplatz in Zurich. Located near Hauptbahnhof, the National Museum has some of the best historic artifacts of European and world history. And after this, you can unwind in the magnificence of nature from the Üetliberg in Zurich with its panoramic views of the city. End the tour of Zurich with the 17th century father of all churches, St. Peter’s Church at the old town next to the Roman Castle on Lindenhof Hill.